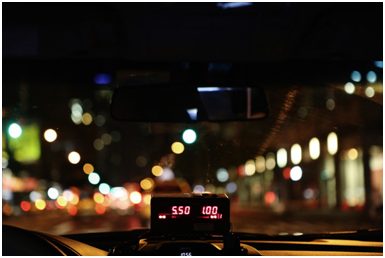 Taxis are one of the most economically viable options to travel in and around the city. They typically charge a reasonable amount considering the premium and customized services they offer. However, every once in a while, we experience or hear of a taxi driver trying to ask for higher fares. Here are some signs we’ve put together to help you realize when you’re being overcharged:

A common problem faced by locals and travelers alike, sometimes, drivers try to get away with naming their own price since their meters seem to be dysfunctional at the moment. Not having an operational meter gives the cab driver the advantage of asking for a price they want to, even though it might be much higher than what you’d be required to pay if a meter was in place.

Some taxi driver try to take advantage of their passengers by taking a longer route to keep the ride going longer. This obviously inflates the taxi fare more than usual. Make sure you know the shortest and quickest route to your destination when you’re using a taxi service and pay extra attention during the ride to ensure that it isn’t any longer than it needs to be.

Having a map installed on your smartphone would be quite helpful in the situation as well. Drivers are less likely to resort to a longer haul if they realize that you’re attentive of the route they’re taking.

Sometimes, drivers use the excuse of not having change to seek out a higher tip. This seems like an unreasonable excuse considering they’ve been driving passengers around all day and should have collected reasonable amounts of smaller bills. To avoid being scammed and losing money because of this, ask the driver to wait while you ask someone nearby for change.

If you’re travelling to a new destination, make sure you do your research by asking around to get an idea of how much the fare should amount to. This way, you’ll know by the end of the ride if the driver is overcharging by asking for unusually higher fares.

If the taxi driver makes random, unnecessary stops on the way, saying he has to pick or drop something off or refuel the car; your best option would be to get off and hail another taxi right away. This not only causes your fares to be higher due to waiting charges, but is also incredibly unsafe.

Texas Yellow & Checker Taxi, a professional yellow cab service in Fort Worth, is sure to provide you with impressive services in the most reasonable fares. Head over to our website or call us at 817-881-6863 for bookings and reservations.